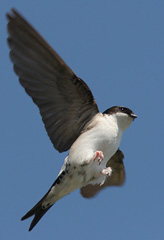 ..An unfortunate and disturbing event occurred in June when the active nesting site of migrating birds located on a house was destroyed which caused considerable distress to one of our families. Checks were made with the Town Hall Environment Departmant who were interested to know details. They confirmed that the Migrating Birds are indeed a protected species and that this destructive action was in contravention of EU Law. They indicated that future events of this nature should be reported to the Guardia Civil and appropriate action taken, which will also be supported by the Town Hall. Please be aware that our environment is delicate and needs looking after.

As readers can imagine, this caused something of a “Stir” amongst the local residents.  I didn’t know what view the Guardia would actually take, I wondered if perhaps they might consider they have more important things to do, but I do know how I felt watching martins nests being routinely destroyed by the maintenance people next door, so I am now happy to know that there is something I can do about it.

The law referred to is the European Commission Birds Directive. Article 1 lists all native species protected and Article 5 states that active nests, eggs or young cannot be destroyed deliberately. The penalties can be severe and include stiff fines and/or terms of imprisonment. 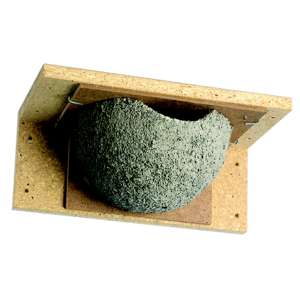 As a personal footnote to this article I decided to give our local house martins a helping hand, they struggle as it is to stick their mud to our modern plastic coatings so I purchased some prefabs for them which attracted immediate interest and we now have the pleasure of watching the adult birds coming and going feeding their chicks. If you would like information on these nestboxes, please see important notes below. Ed 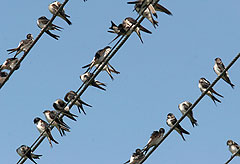 House Martin Delichon urbicum (Avión Común) is migratory here in Andalucia. Winter records exist from Mediterranean basin and Western Europe, north to Britain and Ireland, but west Palearctic and west Asian birds otherwise winter wholly in the Afrotropics. A relatively late migrant in autumn, since late broods are often still in the nest during August or early September. The main southerly movement through Europe occurs during September–October, with a significant minority still transient in November. Return movement begins Africa in March, and first birds can reach Europe late March or early April, but main return to breeding areas in second half of April and first half of May. In western Europe, much more ready than Swallow Hirundo rustica to live in large cities, not only in suburbs but, where air clean, even in centres, e.g. in Málaga. Often mixes with other Hirundinidae, both at breeding places and in foraging, but tends to concentrate round sites often fixed by long usage, leaving wide areas unvisited. Presence of water is often an attraction, although not essential. Like H. rustica, avoids densely wooded and arid areas, but differs in accepting mountainous and coastal as well as city habitats, and in remaining more loyal to primitive rocky nesting sites. Normally does not use reed beds for roosting. General infrequency of observations of birds wintering in Africa is ascribed to their congregating at high altitudes and feeding high above ground. Commensalisms with man generally accepted, and must have much increased numbers and extended range within historic times. Ed.

1. If you are concerned on any wildlife issue and witness what you believe to be an illegal act against our birds or other animal/plant, then this should be reported immediately to by telephoning the Guardia Civil’s Seprona wildlife division (green department) on ‘062’.
2. Link for downloading Bird Directive as issued by the European Commission
3. Link for obtaining nestboxes for House Martins and other species