By way of an update, its great to report that the bearded vulture can be spotted again in the skies of Andalusia, 23 years after its extinction in this region. The Fundación Gypaetus (Gypaetus Foundation) works for the conservation of the species in Andalusia, and is responsible for the execution of the Andalusian Programme for Reintroduction of the Bearded Vulture. They report that 10 out of 14 bearded vultures that where reintroduced in Andalusia over the past 4 years are developing well. In addition, La Fundación Gypaetus has reported that ‘Tono’, one of the oldest birds in the programme, arrived in Andalusia again after having spent more than seven months in the Pyrenees. 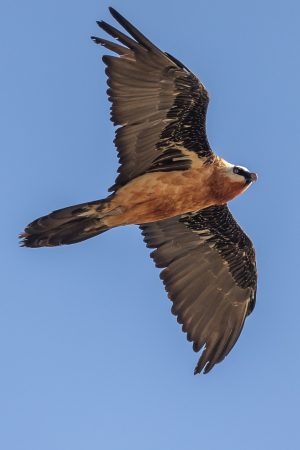 Releasing bearded vultures in the province of Andalusia is possible thanks to an agreement between the Ministry of Environment (la Consejería de Medio Ambiente, CMA) of the Junta de Andalucía and the Vulture Conservation Foundation (VCF). With the arrival of the first two bearded vultures, given to the CMA Guadalentin Breeding Centre (Centro de Cria Guadalentin, CCG) by VCF, a dream came true: the start of a Bearded Vulture Reintroduction Project in Andalusia. Momentarily, the GCC houses a dozen birds of different ages, most of them transferred by the VCF, which also manages the Alpine reintroduction project.
VCF comments that the movement of the birds is totally normal behaviour for young released vultures, and has also been registered in the Alps. All chicks are released at the age of 3 months (one month before starting their flight) using the ‘hacking’ method. This method has been used successfully in the Alpine project, and is excellent to establish a self-sufficient wild population. Birds recognise the release area as their place of birth, returning to this area when they have reached sexual maturity.
La Fundación Gypaetus now ensures that all five animals released in the spring of 2009 are now self-sufficient, and roam large areas within the National Park of Cazorla, Segura and las Villas (Jaén), and the mountain range of Castril (Granada). In order to accurately track all released individuals, they are equipped with a GPS transmitter, using a pelvic harness. The birds are ringed, and to identify them in flight some feathers of the wings and tails are discoloured following an international code for each bird.
The bearded vulture is one of four birds of prey that lives in the Iberian Peninsula and is in danger of extinction throughout Europe. Its wingspan is nearly three meters long and weighs five to seven kilos, it’s diet consist almost exclusively of bone. Currently there are only three wild native populations in Europe: Crete, Corsica and the Pyrenees, the latter being the only viable population but is not without serious threats. Additionally there is another viable population: the reintroduced Alpine population.

Keep updated with this project by following the official website: http://www.gypaetus.org/