The Migres Foundation have confirmed a recent discovery into the behaviour of the Short-toed Eagle Circaetus gallicus. A species of raptor, the Short-toed Eagle was previously believed to have been solitary, but has since been discovered to be roosting communally near to Tarifa. The roost involved 139 individuals and they were discovered in woodland near Tarifa in the province of Cadiz. It is a remarkable find and is testimony to the work of the Migres, which has long been the foremost organisation for the study of migration here in Andalucia. The study was first published by Ibis and refers to March 2009.

The technical team of the Migres Foundation have detected, in the Strait of Gibraltar, for the first time a “high concentration” of short-toed eagles. The significance of this finding is that this species is normally solitary.

139 Short-toed Eagles Circaetus gallicus have appeared together in the Strait area, specifically in a wooded area near Tarifa. This was confirmed by field work conducted by the foundation Migres, which is developing a pioneering project. The purpose of the research is to understand the biology and conservation of the short-toed eagle, listed at European level as ‘vulnerable’ and in Spain as ‘insufficiently known’. 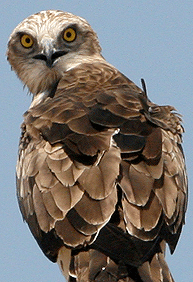 The short-toed eagle, a diurnal bird of prey, is characterized by its relatively large size (62-67 cm in length and wingspan 166-188 cm) and often exceeds two kilos.

It’s distribution extends throughout the Palaearctic region, from the Iberian Peninsula to India through southern and central Europe, the Caucasus, Middle East and central and southern Asia. In Africa, only occupies a small strip on the northern most sector. It is not known, with any certainty, the size of the population in Spain; although it is estimated the current population is approximately 2,850 breeding pairs.

Treats to the species are due mainly to declining populations of reptiles in agricultural areas and the density of forest cover in neglected rural areas, both of which substantially limit the area in which the species can hunt and feed.

The short-toed eagle is a forest species that need, in the vicinity of farming areas, deforested areas of bare rock or open ground to hunt reptiles. Their diet consists almost exclusively of reptiles, snakes constituting 95% of their catch.

The press release is sketchy and lacking many interesting facts, which I am certain will appear as time allows. I am also sure that other groups such as the association ‘Cigüeña Negra’ most likely suspected this activity with Short-toed Eagle, but we have given credit to the Foundation Migres for, what is believed to be, this 1st time proven activity with the social behaviour of the species. The missing ‘when’ has been the Spring of 2009.

It is also true, and I agree, that communal roosting is common in raptor species migrating across the Strait of Gibraltar for Africa. Certainly it is common behaviour for, amongst others, Black Kite, Egyptian Vulture and to a lesser extent Booted Eagle, but on a personal level I have never heard of or seen Short-toed Eagle display the same behaviour. Clearly it was likely given the experience in other raptor species, but, and this is the point, it had not been previously proven for this species. It may well be right to say, that the experience of communal roosting in this and other instances is likely to be in the nature of a ‘holding area’ before suitable conditions allow for birds to depart for Africa.

Hopefully some facts leading-up to the discovery and other aspects of the study will be available for general publication at some point in the future, although a full account was released through the Ibis (the international journal of avian science) 2010. It appears radio tagging led to the actual discovery and this is part of a wider study to understand more of the life cycle of a species of raptor which has been badly served by past research.

Not much clearer I know, but hope this explains the article a little better.