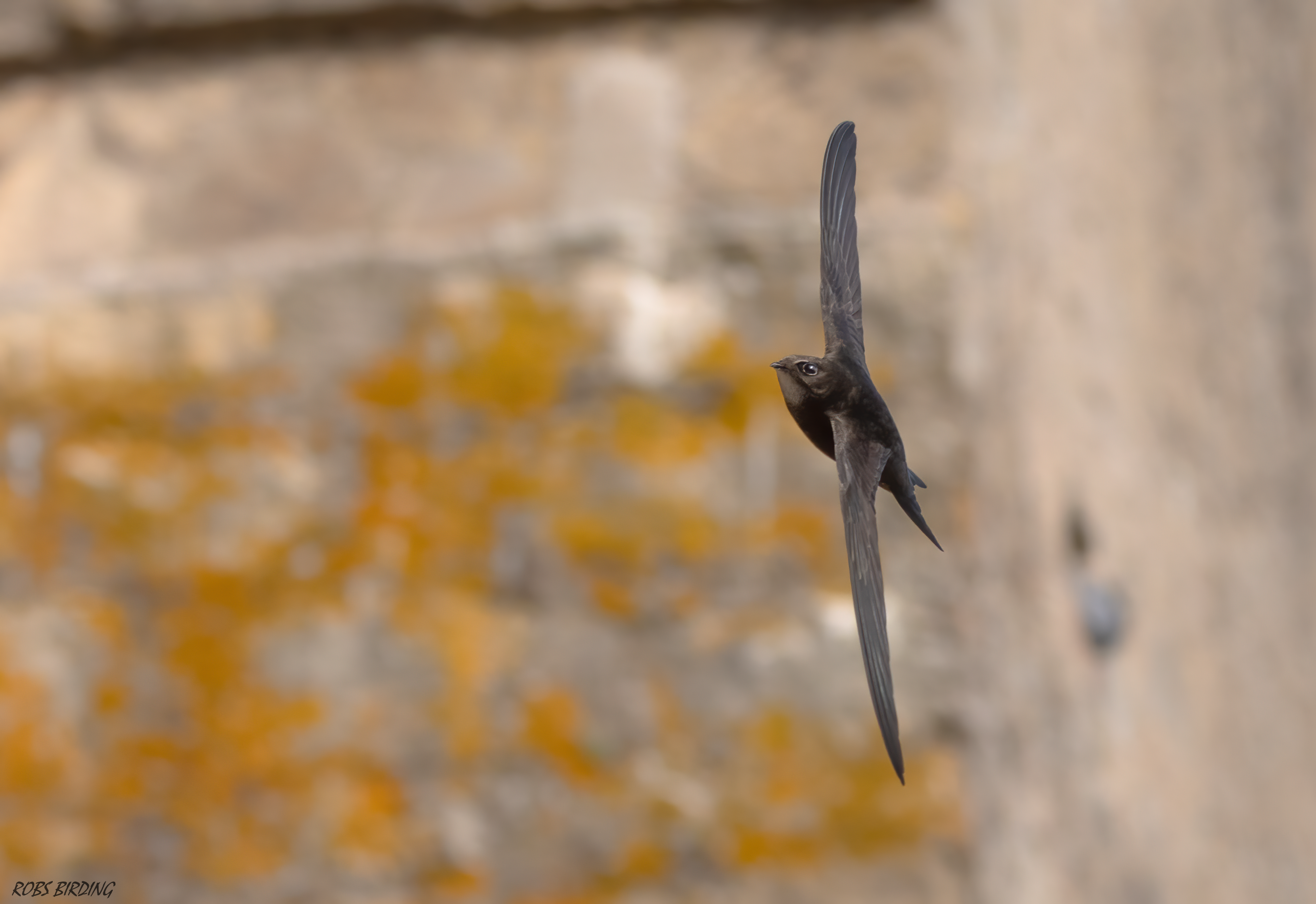 Andalusia is packed full of beautiful towns and mountain villages usually surrounded by a pristine natural habitat and full of old-world romance. The Arab whitewashed hamlets of the south where an enchanting world of Moorish charm awaits visitors who travel off the beaten path. These small, quiet hilltop villages are distinguished by their simple clustered whitewashed houses topped off with old sunbaked terracotta tiles, their roofs, a rolling red Martian landscape of nooks and crannies; these for centuries have caught the swift´s keen eye. The architecture derives its influence from North Africa (present-day Algeria and Morocco), the Moors’ native land. These locations barely make it onto most Andalusia tour itineraries but are certainly are five-star accommodation for a swift family arriving from a long flight back from Continental Africa, to spend a long hot summer in the South of Spain. The swifts have one thing on their minds – to procreate.

Our subject is a medium-sized aerial bird, which is a superb flyer. Sleeping, eating, bathing and even mating on the wing, swifts rarely touch the ground. They are also the fastest birds in level flight, with an impressive top speed of 69mph. Swifts are plain sooty brown, with a white throat, but in flight against the sky they appear black. They have long, scythe-like wings and a short, forked tail. Swifts are summer visitors, they spend their winter in Africa, south of the Sahara, where they follow the rains to take advantage of rapid changes in insect populations. In fact, the scientific name of a swift (Apus apus) refers to a peculiar biological trait that makes them unique. They are effectively legless, or rather their legs are so short and weak, they hardly qualify as such. This is why we will never see a swift sitting on a cable or a tree branch. In fact, we will never see a swift quietly perched anywhere. Swifts migrate c.3,400 miles twice a year. While many immature birds return to the breeding grounds in the spring – some will remain in Africa.

The European population is estimated at between 19-32 million pairs.

Swifts are insectivores. They eat mosquitoes, moths, aphids and a variety of other flying insects. They are not fussy! When the food supply becomes scarce due to the weather, the swifts follow the rain over long distances and leave everything else behind. In such cases, young swifts can go up to 14 days without food by going into a kind of “starvation sleep” and greatly reducing their energy requirements. The swift only folds its wings and comes to rest for a few days each year, in late April or early May. This is when swifts lay their eggs in plain nests tucked into the cavities of buildings and sit there with the sole purpose of incubating them and feeding their chicks once they hatch. The rest of the time they spend in flight, which is why bird lovers call the swift “the bird of the wind”. 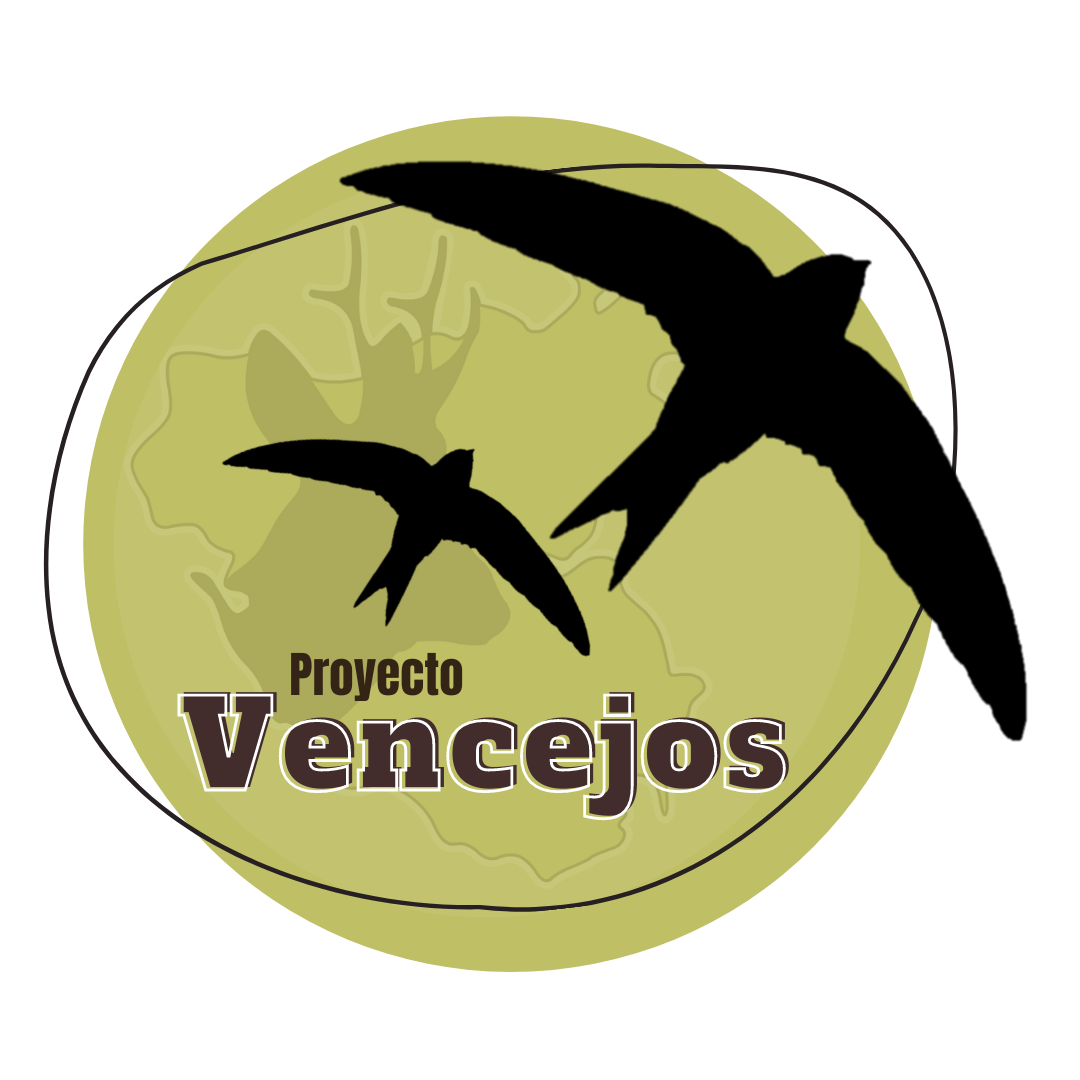 Swifts pair for life, returning to the same site each year for a little nest renovation before laying a brood of eggs. The swift’s eggs are slightly more elongated than a typical bird’s egg. Each season, female common swifts lay two to three matte white eggs. Their cavity nests are made of fine stalks and feathers that the parents catch in the air or scavenge in mid-flight. The rather loosely and haphazardly arranged nesting material is then glued together with fast-hardening saliva. They like to live in houses and churches, squeezing through tiny gaps to nest inside roofs making the picturesque Pueblos “blancos” a prime annual destination. But as more old buildings are renovated and gaps in soffits closed up, swift nest sites are fast disappearing. A detailed analysis of more than 100 million meteorological data points shows that Andalusia is feeling the heat from climate change more than most. This Province has experienced one of the highest temperature hikes on the continent. This, in part, has resulted in swifts being globally threatened, with big declines in breeding populations and ranges. The breeding cycle has been severely affected by an early un-seasonally super-heated hot air called the “terral” wind, drifting across the Straits from the Sahara, the wind that carried the birds just a few weeks before, now carried sand to darken the skies yellow. Thousands of baby swifts have been scorched by the heatwave. The tiny fledglings were “cooked” as temperatures soared relentlessly across Spain.

With daytime temperatures of over 100ºF, an individual ceramic tile became an anvil for the sun, the invisible UV rays beating down upon its surface, sufficient to fry eggs and under the eaves of a roof it was that of a bread oven. Large fluctuations in temperature are rare and sadly, this year´s event coincided with the hatching period of the common swift. All around Andalusia, the tragic story unfolded of baby birds desperately scrambling from their hidden nest too early, in search of cool air only to fall helplessly onto the pavement below. In some streets there were hundreds of chicks lying at the foot of buildings, small helpless grey fluffy jets, with their swept wings doubled, some dying and some barely alive. Chicks who could not fly, threw themselves out from the safety of their home because they couldn’t withstand the elevated temperatures inside, they were literally being cooked. Climate change means summer is now arriving up to forty days earlier, putting the swift species in jeopardy. Under normal circumstances swift young would fledge in mid-July, when the chicks would be able to fly. Thousands were caught out by the heat wave and didn’t have time!

In more recent decades the application of pesticides and habitat destruction may have had adverse effects on swifts by affecting their food supply. The refurbishment of many older buildings has resulted in loss of nesting sites. Swifts urgently need our help. By installing a Swift brick in a wall, or putting up a nest box, we could give a swift a place to rest to raise a family. 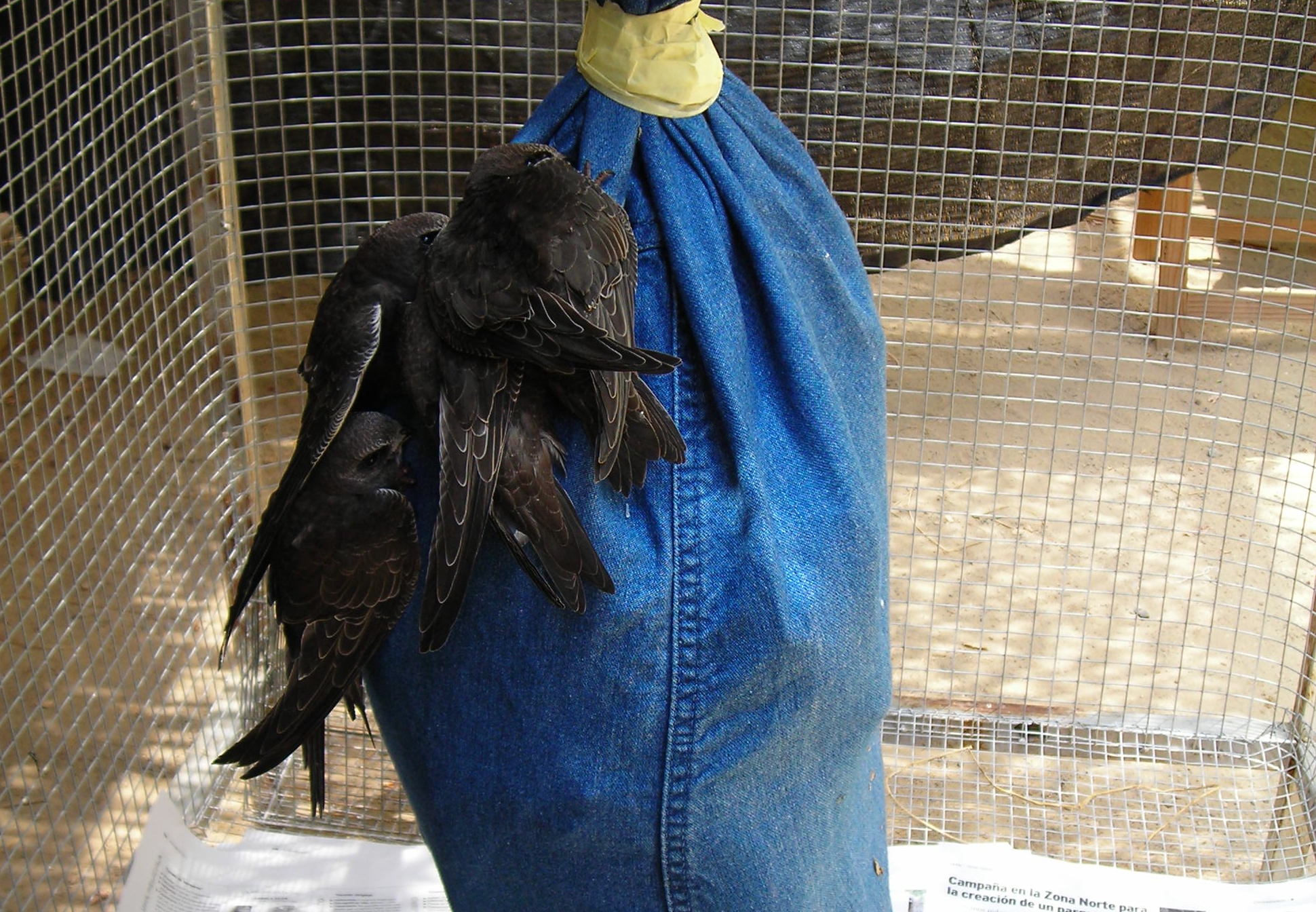 The Andalucia Bird Society Project “Save our Swifts” will support “Proyecto Vencejos”, which in turn, aims to provide nest boxes to assist in restoring lost nesting sites. It is an immensely important work as these amazing birds are under threat from nest site destruction, less flying insects and climate change. With the loss of nesting sites, swifts are increasingly dependent on artificial nesting aids. The project aims to help swifts by installing nesting boxes. A swift box should be wider than it is tall, at least 28cm wide and 17cm deep, with a horizontal, oval entrance hole of 64 x 32mm. Since swifts often breed in colonies, we recommend installing several boxes at once. Alternatively, so-called stone nest cups or nest bowls are also suitable for swifts, which can be built directly into the wall of the house.

If you find a young swift outside the nest, you need to check two things: What condition is the bird in? And how developed is it? If you find a nearly fully grown bird, wait and see if it flies away again on its own as perhaps it just needed to recover from a failed flight attempt. So, if we come across a swift fluttering on the ground, unable to fly away, do not place the bird in a cardboard box. Instead take the bird out to the terrace or balcony and launch it into the air as we would a paper plane, aiming high into the sky. This allows the swift to take flight and return to its place in the world – the air.