It is rewarding to realise, that with increased membership, we are now able to contribute significantly to regional conservation projects. More members mean more funds for conservation, so we hope each member will encourage others to join our Society. Last year we supported Tumbabuey, a voluntary non-profit organisation, with their efforts to rescue and release Montagu’s Harriers. As you will read below, the 2017 campaign was an outstanding success. It is always a prerequisite, to ensure our support for conservation projects, that we are able to get value for money for our members and give support to projects demonstrating a history, a strategy and long-term goals. There is no doubt that the Montagu’s Harrier conservation project fulfills all our criteria. Several members have asked if they can make private donations to this project; so if members wish to make personal donations to this scheme, then please contact your Society for details.

Throughout Europe there has been grave concerns surrounding the survival of Montagu’s Harrier as a frequent and regular summer breeding visitor. The decline in breeding birds has been catastrophic during the past couple of decades and an even more noticeable decline in recent times. Changes in agricultural practices provide for the main reason behind this decline, due to earlier harvesting of cereals and the change in use of oat crops. Unfortunately Montagu’s Harrier has a preference for nesting in cereal crops, as they resemble their old and more traditional habitat of dense reed beds and upland grasslands. There is an urgent need to find ways to help this harrier through managing breeding sites and diligent nest protection. Through our association with the conservation group Tumbabuey, we are now exploring how a new approach to nest protection and pulli/egg rescue can be used as a model that can be successfully put into practice throughout the region and beyond. Last year we supported the project for the first time with a modest donation of 500 euro. The results achieved were highly successful and so this year we have donated 2,085 euro, of which 2 members have donated 85 euro. You can read below a brief summary of the project for 2017 and an interview the Society did with the project group during February 2018. The group, as you will read, are enthusiastic about members of the Society becoming involved as volunteers. So have a read through the article and let us know if you would like to become more actively involved.

How Did This Project Get Started?
The members of the group have been keeping an eye on Montagu’s Harriers since 2003. Following and witnessing a tremendous decline in the numbers of harriers during past years, the regional government had carried out a survey plan, but it didn’t turn out to be very rewarding or very informative. Miguel González worked as a conservation technician for the autonomic government, ringing the chicks at their nests since 2004. He has been rewarded to witness a high return rate. Miguel says ‘These Montagu’s Harrier are telling us that they are loyal to the very places where they were born’, which provides reason enough to focus on and maintain these important areas. The dramatic decline and loss of nesting pairs resulted in the formation of a dedicated group of volunteers to plan a strategy to conserve and protect returning breeding pairs.
Some of the many that have been volunteering with the Montagu’s Harrier conservation project are members of the COCN (Colectivo Ornitológico Cigüeña Negra) and there are also numerous individuals who carried out nest rescues and bird counts.

How Many Active Volunteers Are Involved In This Project?
In the last campaign (2017), around 25 people actively took part. Some of them were from the following organisations:

An insight as to what is required for a successful season for our Montagu’s conservation project: 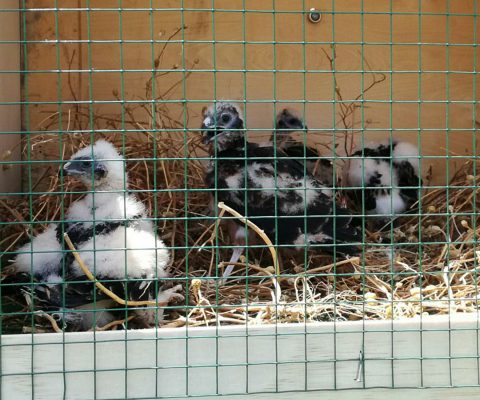 After a great many meetings with farmers, the project has obtained one of the best fields to plant early cereals and to do a very late harvest for 2018. In this field a few pairs of Harriers normally breed each year and because the group will have planted crops before other surrounding fields, they expect that many more Montagu´s Harrier will choose the project’s field to breed. They have chosen to grow oats (it is a variety taller and denser than hay or wheat).

Other Fields
The project team will always find some nests in other fields in the surroundings of Tahivilla, so there is a need to have money available for other farmers in order to protect those nests. The money needed is variable, because it depends on the number of pairs and nests that are found in these fields. If the group finds one or two nests on private land, they will pay the farmer to leave a large area unharvested around the nest.

Birds from the Andalucía region
As you might know, when the Andalucía government finds destroyed nests, with eggs or where chicks have survived the harvester machines, they bring the surviving chicks to the group for feeding and release after some days in a hacking box. The group has been doing this for the last two years. For 2018 the group have spoken with a local flour factory, who own the field for hacking and releasing these birds, they have again given their kind permission to release birds in the same field as was undertaken in 2017.

So How Was monies Raised For The Project In 2017 Distributed And Used By The Group? 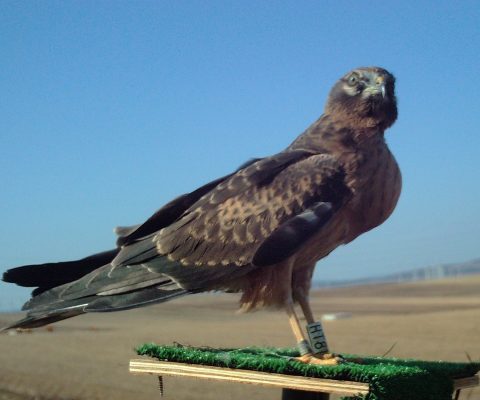 We asked Miguel González Perea about the reaction of locals to the project and he said it was extremely positive and helped by their education initiative, where they have led related educational campaigns in 3 nearby schools.

We asked Miguel about the project’s crowd funding campaign during 2017 and he told us those funds will be used towards this season’s projects, i.e. put towards the same actions for 2018 as those mentioned above.

Montagu’s Project 2018
The Montagu’s Harrier breeding protection and preservation campaign in 2017 was a stunning success and supported by a financial donation from the Andalucía Bird Society. In order to keep this good initiative and collaboration going for this year’s breeding season, the ABS scheduled an on-site interview with the volunteers, held on the February 2nd 2018 in Tahivilla. 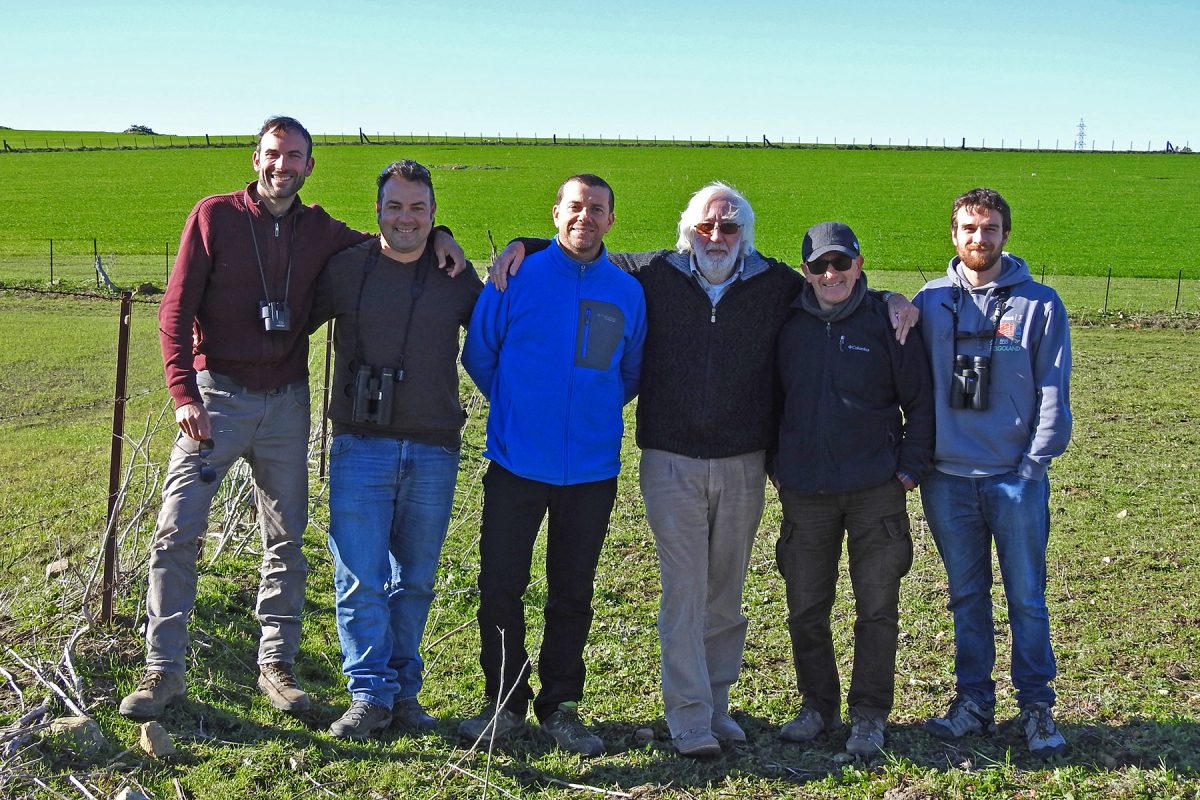 Interviewees, representing the volunteers of the Project:

Where Will The Andalucia Bird Society’s Funds Go?
Two main actions will take place in the 2018 breeding campaign: first on plot number 1, the group will be keeping a safe plot for not just Montagu’s Harrier, but hopefully a considerable number of Stone Curlew and Calandra Lark to breed successfully too, added value ABS thinks. Then the group will provide a hacking facility on plot number 2. 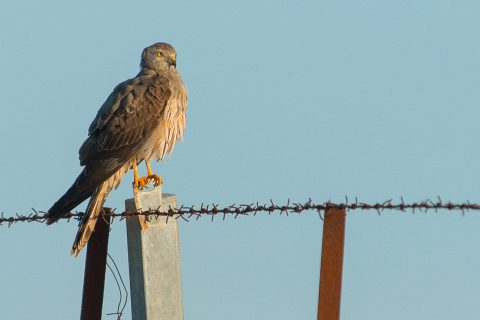 This is carried out by means of renting of the following areas:

How Many Hours Were Spent In Achieving Results?
There were lots of laughs to this question and answered simply ‘too many’! Lots of actions took place to make this project a reality. Dealing with the landowners and negotiating the use of the desired plots took some time; anyone involved with farmers will understand this aspect of progressing the project. The group also needed to obtain the regional government permits for collecting the eggs from nests. Then, fieldwork is required to locate the birds and their nests. As for the hacking process, this involves 10 people taking it in turns, working in shifts to attend to the chicks for around 3 hours a day for 3 months. The logistics for obtaining and keeping food for the chicks also takes a considerable amount of time.

Would It Be Possible For Abs Members To Give A Hand?
The group would appreciate as many ABS members as possible to give a hand, especially when counting Montagu’s Harriers, locating pairs and even their nests. The time for this would be the beginning of April. Helping with the hacking would require less people and a lot of commitment, but ABS members would also be welcomed to help feed the chicks from July onwards.

What Are Your Hopes For The Future?
Tumbabuey hopes the Montagu’s Harriers that were either born or raised at the project site will be back and breed in the same area in future. A little tongue in cheek the group asked ‘How about creating a small nature reserve or ZEPA (IBA)?’ How Are Funds From Abs Helping The Project? The group are faced with the inability of purchasing an appropriate piece of land, it would cost around 300,000 euro, they then went on answering our question with their own ‘How about combining efforts to get this money?’ there were lots of laughs from the interviewers at that one! Land rentals seem to be the only practical way to keep helping the breeding Montagu’s Harrier. Therefore, ABS funds will, for now, always be welcome. Thus we concluded our interview and then we accompanied the group to visit the area where this year’s project will take place. Fittingly a female Hen Harrier passed by and Calandra Lark were singing everywhere.