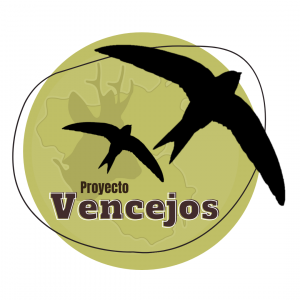 During 2021 against wind and Covid-19, the SGHN was very happy to present a new bird conservation project. The name, Proyecto Vencejos, being “vencejos” the Spanish word for swifts, is a volunteer program aimed at the active protection of swifts through hand-rearing and rehabilitation of chicks that for several reasons fall from nests during the breeding season. The Proyecto has also a deep commitment to working towards the spread of information raising awareness to the great importance of these birds and the installation of nest boxes in potentially suitable breeding sites.
In this article we give you an update on the article in the Summer edition of this magazine and some result as per 31st of August.

Swifts (G. Apus) are migrating birds that • come to breed in spring and go back to spend the winter in sub-Saharan Africa. They nest close to humans and like to • occupy the cracks and crevices in our buildings. Their role is key to urban ecological conservation, as they serve as natural plague control agents by feeding upon a valuable amount of insect pests. One swift can eat as much as 55 kg of insects a year. Many chicks fall out of their nests before they are ready to fly and are found, sometimes in high numbers, by people who take them to the several recovery centres. The aim of the Proyecto Vencejos has been to provide a net of volunteers who foster these chicks at • home until they are fully grown and can be released into the wild.
The hand-rearing process has been focused on two of the most common swifts in the region: Common Swift (Apus apus) and Pallid Swift (Apus pallidus). The Junta de Andalucía, through their recovery centres in the province of Cadiz —CREA Dunas San Antón in El Puerto de Santa Maria and ZooBotánico in Jerez, have submitted the swift chicks arriving in their facilities and supervised the whole fostering process. From there, the chicks were placed under our volunteers’ care, who completed their feeding and development at home.
Whenever possible, each volunteer receives the necessary food from the CREA and the Zoo, funded with money collected through the sale of merchandising products by the SGHN and donations given by people who have altruistically collaborated with us. Volunteers have also been provided with all the necessary veterinary assistance thanks to the tremendous support of the vets of the CREA and the ZooBotánico, who have strived to always help the project.

The activities performed by the volunteers of the Proyecto Vencejos have been, among others: 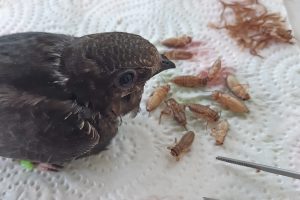 Transport of swift chicks from the recovery centres and distribution to volunteers.
Training session for all volunteers culminated in May 2021 with a gathering of more than 90 interested people and given by specialists Andrea Guirado of SOS Vencejos, Juanjo González Magro of Asociación Vencejos de Extremadura, Elena Moreno of Asociación Ecourbe, José Ignacio Quevedo Ferrer and José Luis Nieto Quevedo of Colegio Esclavas- SCJ Jerez, and Isabel Molina and Juan Carlos Capuz of CREA Dunas de San Antón.

Feeding and care of swift chicks. This includes hand feeding with an insect-based diet (mainly crickets and mealworms of adequate size according to chick development stage). 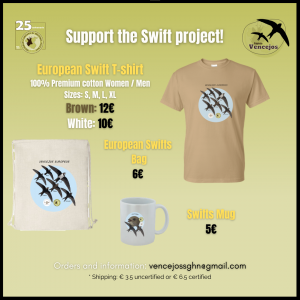 The project has been funded mainly with SGHN own resources through the sale of T-shirts, mugs, badges, bags and stickers, altruistically designed by a distinguished local nature artist, Nicolás Ruiz “Espintapájaros”. We have also received donations from nature lovers. All the money collected has been used mainly to buy food and next boxes for swifts, as well as to cover the expenses of the different activities, workshops and events.

Stages of the project

The first stage of the Proyecto Vencejos was the dissemination of the activity to social networks and the recruitment of volunteers. The second stage was to launch the on-line training workshop for volunteers which was held in April 2021. To give this course, we had some of the most respected experts on artificial methods of rearing altricial species. At the end, volunteers acquired all the basic knowledge they needed for an adequate fostering of the swifts. The actual hand- rearing started as soon as the first chicks arrived in the recovery centres at the end of May.

This project has an approved authorization by the Junta de Andalucía, who has issued the relevant permits to work with this protected species. The season finished we organized a closing event to thank volunteers for their incredible work and commitment and to issue them a certificate of participation as a token of gratitude.

At the end of August 280 swifts had arrived in the recovery centres. Of them, 144 were Common Swifts and 136 were Pallid Swifts. During the first weeks it was mainly Common Swifts, which suggests that this is the most abundant species in our cities and villages. However, from the end of July almost all the swifts brought to our centres were Pallid. This is due to the fact that Common Swifts breed only once in our latitudes before they depart to Africa in August, while Pallid Swifts usually raise two broods during each breeding season. This explains the high number of entries in August and even in the beginning of September.

Once they enter in the CREA or the ZooBotánico, the animals were checked and supervised by the vets, and treated accordingly. If physical condition was bad, birds stayed and received adequate care internally. In the case of viable chicks, they were promptly distributed by the Project coordinators to the volunteers, who came to pick them up and were given a supply of food. Birds were ringed with a temporary ring for the purposes of identification and individual monitoring. A WhatsApp group was created to include all the volunteers’ receiving swifts from the organization. This served as a space to share information and ask questions about the progress of their chicks. 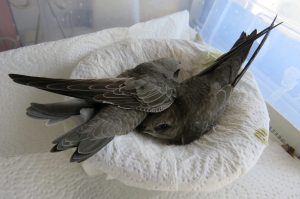 As of 10 September, 53 volunteers had participated in the hand-rearing part of the project.
It should be mentioned that some of the swifts admitted for care were unrecoverable, animals with very serious injuries (some adults too) or were in very critical condition that made recovery nearly impossible. Some of them were nearly dead on arrival. Some birds suffered from illnesses (a potential still unidentified virus) that affected feathers during growth and caused neurological problems leading to the death of the animal. For all these reasons, of all the admitted birds, a total of 90 finally died and 188 swifts were released.