The Bahía de Cádiz Natural Park is an amphibious territory. Down through the centuries, humans managed to reconcile conserving and enhancing its natural capital with the use of environmental services thanks to the sustainable use of the salt marshes, tidal streams, creeks and saltpans.

The Fund for the Stewardship and Recovery of the Salt Marsh (SALARTE) is a private non-profit entity whose purpose is to work to recover artisan coastal saltpans, to conserve biodiversity and to foster local employment based on endogenous resources.

Up until the middle of the 20th century, this territory, with a surface area of 10,522 Ha, was home to over 170 artisan saltpans, which generated biodiversity, economic resources and underpinned an exemplary social fabric. Only 4 artisan saltpans are still worked and 5,373 hectares of what had been world-famous saltpans and an example to all now lie abandoned.

The abandoning of the artisan saltpans led to a loss of environmental diversity and the degradation of key habits for migratory species of birds to rest, feed and breed along the Atlantic flyway. It also meant the squandering of countless natural resources that could help the recovery of a depressed socio-economy and, finally, the disappearance of the emotional bond between society and the territory.

After discovering this dramatic reality of territorial abandonment and loss of environmental quality in a province with a 40% unemployment rate, this team of professionals – who at the time had the advantage of working for the Public Sector – began to transform a salt marsh used for fly tipping, poaching and other illegal activities into what is now the largest Metropolitan Park in the Iberian Peninsula, Los Toruños. We also organised two International Artisan Salt Fairs and worked to get Spanish legislation changed to ensure a level playing field to manage Spanish artisan saltpans on a par with countries such as Portugal and France. In 2012, we set up this NGO (Salarte) to recover salt marshes as a private venture. SALARTE seeks to show that the sustainable management of salt marshes generates socio-economic benefits for the local population, fosters biodiversity, improves the functioning of natural processes and strengthens the bond between humans and their natural heritage.

Therefore, a year ago, we took over an old saltpan-island that had been abandoned decades ago. Thanks to our experience and steadfast work (with barely any resources and no public funding), we are gradually transforming it into a Natural Reserve that seeks to involve the human being in the salt marsh, increase biodiversity and showcase its wealth by organising lectures and guided visits to this legendary territory.

SALARTE is the only private NGO to manage a Reserve Zone of the Andalusian Network of Protected Natural Spaces, which is designated as a “Special Area of Conservation” and is part of the European Natura 2000 Network.

La Covacha is an old saltpan with a surface area of 26.5 Ha. It is part of the Trocadero Island and one of the main squares in Paris is named in honour of the Battle of Trocadero fought here. Despite being a cultural, historical and ecological centre, the Trocadero Island enjoys maximum legal protection, even though it has been abandoned for decades. 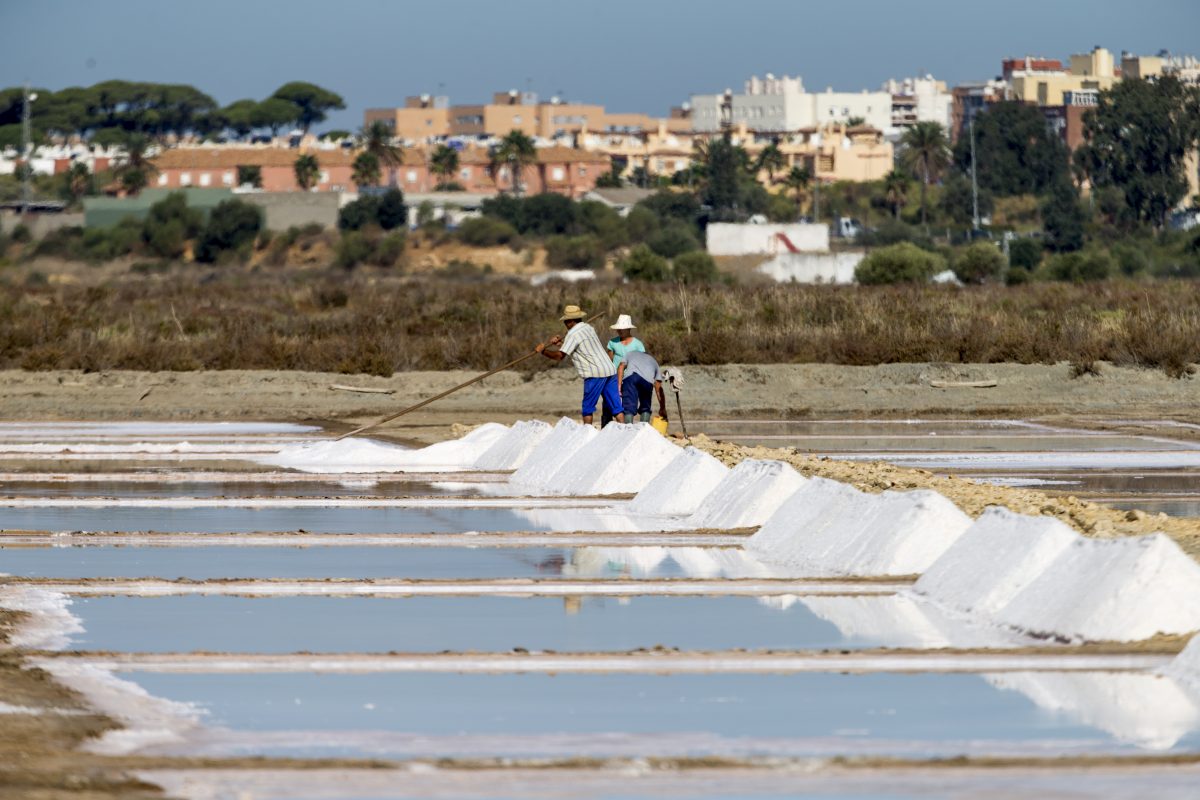 Despite the numerous restoration and conversation projects by public authorities, the lack of upkeep and management of La Covacha meant that the tides and strong back wash had damaged the sluice gates and outside boundary walls that protect La Covacha from the surrounding marine environment. This led to a dramatic drop in the numbers of spoonbill (Platalea leucorodia) using the colony based in La Covacha since 1996. Convinced that civil society needed to take up the management of the saltpans and areas in the maritime-terrestrial public domain, SALARTE sought authorisation from the Regional Government of Andalusia to take on La Covacha for its integral management as a service for aquatic and marine biodiversity. Salarte, a private NGO, is made up of young independent professionals that do not have sufficient economic resources to invest. However, thanks to environmental volunteer drives, agreements drawing upon the expertise of shell fishermen and the organising of bird-watching routes, we have repaired the damage to the outside boundary wall, built new sluice gates and are managing the water inside the island to foster biodiversity and recover the island as a spoonbill breeding area.

During the spring and summer of 2014, the Osprey (Pandion haliaetus) chose La Covacha as the site for the first attempt of non-assisted reproduction in the Bahía de Cádiz Natural Park since it was declared extinct as a breeding bird halfway through the 20th century. Our aim is to use management resources to encourage osprey breeding in 2015 and future years.

Therefore, at the end of this winter and early spring, we made significant improvements to this island, which were urgently needed, and involving an investment of 7,000 euros. Even though the association lacked the funds, the SALARTE members decided to undertake the work even with the risk of having to donate the money themselves. The construction company has been highly supportive of the project, lowered the cost of the works and agreed to allow us to pay in instalments.

Thanks to a successful crowdfunding initiative, we have managed to raise nearly half the cost of the works and La Covacha has welcomed spring and its nesting birds with a series of small but exciting improvements, consisting of: 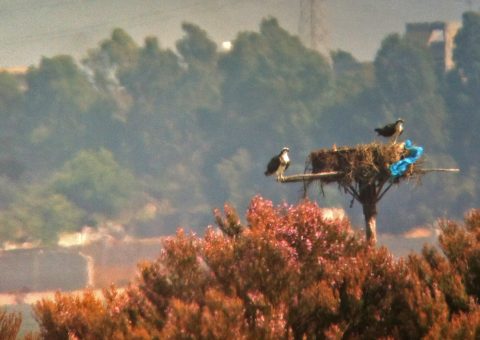 Despite being quite common in the UK, land stewardship is a tool that is practically unknown in Andalusia. We aim to set an example to show how important it is for civil society to get involved in restoring the natural environment and how it generates environmental benefits, leads to social improvements for the population and recovers territorial pride. We are striving to get the general public to be committed to improving the territory and reproduce the Anglo-Saxon environmental management model in Andalusia.

We would therefore be delighted to welcome Andalucia Bird Society and nature lovers, with whom we have such strong ties and who have done so much down through the years to showcase the birds of Andalucia to scientists, nature lovers and enthusiasts around the world. We would be delighted to welcome you to the Bay of Cadiz. SALARTE technicians will show you the secrets of the last traditional saltpans, explain how they work and let you discover the mythical La Covacha Island for yourselves.

The support of ABS members is fundamental for this project as an impetus to help this small organisation continue working on our common goal: knowledge about and respecting nature.

You will also be able to discover the seagrass meadows, which are home to many species of fish, shellfish, shrimp, prawns, sea horses and other important species. A traditional fishing boat can take you through the tidal reed beds and sea grass meadows to disembark –at the brand-new jetty– on the island that the Hundred Thousand Sons of St. Louis seized during the Peninsular Wars. You will there learn how the marshland water is managed using sluice gates and walls, along with having time for bird-watching and to take in this unique scenery.

We look forward to welcoming you to the Bay of Cadiz and take you to La Covacha where you will discover the legacy of centuries of converging evolution between humans and nature.

Juan Martín Bermúdez, manager CEI.MAR Foundation, holds a degree in Environmental Management from the University of Wales (1997-2001) and Master in Natural Areas Protected from the Autonomous University of Madrid (2005-06). Juan Martín’s professional career began with creating his own environmental consultancy firm (2001-2006), which worked as a technical advisor for the Doñana Foundation (2003-2006), among others. Subsequently, he has been director of Marsh Metropolitan Park The Toruños and Pinar de Algaida (2006-2012) and Manager of the Metropolitan Park Network of Andalusia (2007-2011), launching the Network of Open Spaces and Green Routes of the Bay of Cadiz and the Metropolitan Park of Palmones, in Algeciras Bay. Author of several publications, he has been coordinator of the book “Natural Park of the Strait: Border of Two Worlds” and promoter of the Festival of Migration for the Strait of Gibraltar, an ornithological international meeting. He is a renowned member of the Governing Board of the Bay of Cadiz Natural Park and chairs the Fund Custody and Recovery of the marsh Salinera.